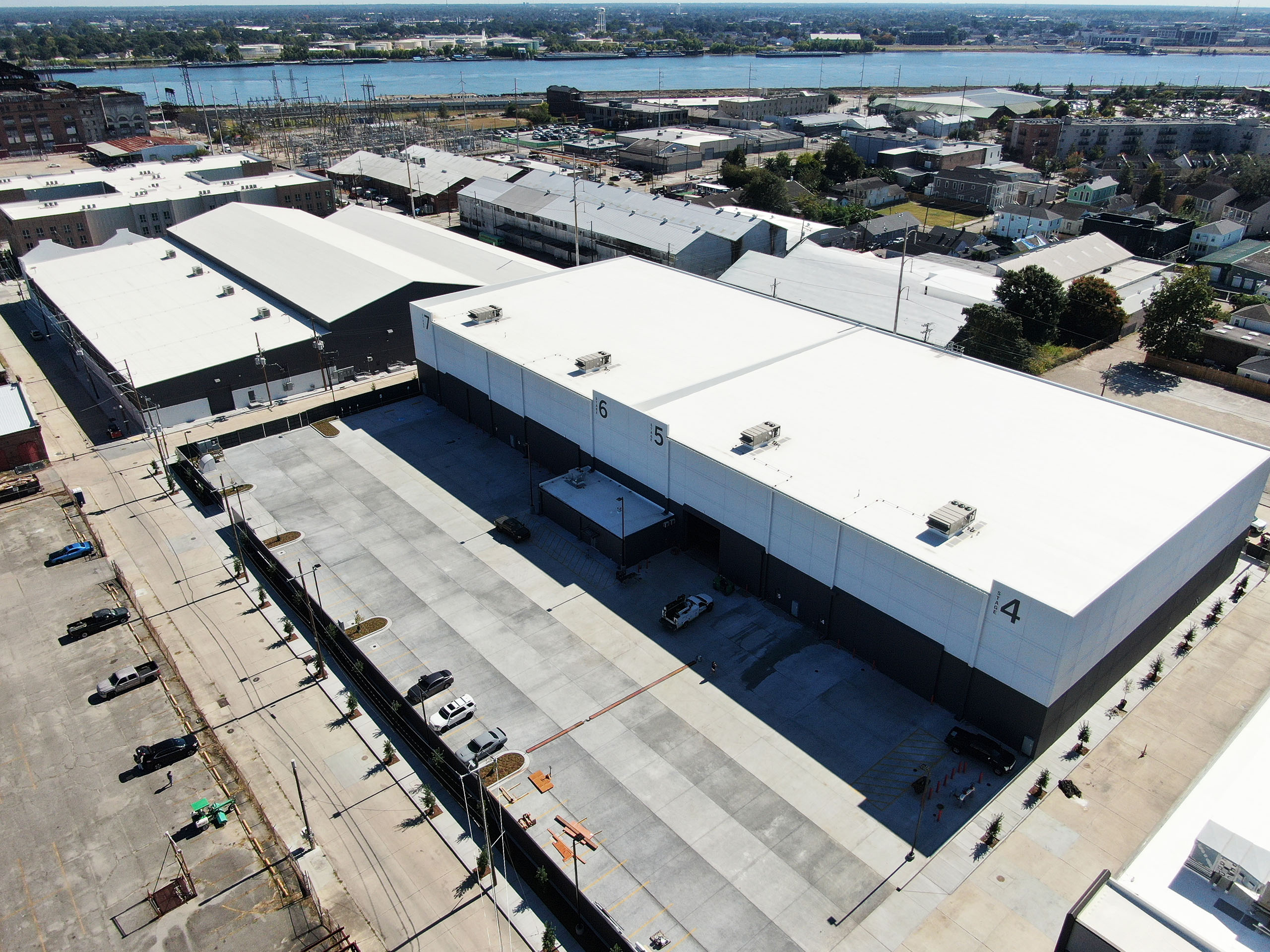 The Crescent City’s been seeing stars since 2002, thanks to Louisiana’s booming Film & TV industry. The push to film in and around New Orleans has only accelerated in recent years. To meet the demand, Second Line Stages (SLS), one of the largest studio operators in the state, was ready to expand. As our cross-Tchoupitoulas street neighbor, Impetus was engaged as Design-Build Contractor to increase their size from 170,372 sq. ft to 287,327 sq. ft., along with 159,627 sq. ft addition of production office and support space. Besides its wealth of components, the ultimate goal was to complete and deliver the project in a slim 17-month window. It may have been our first project in the Film & TV space, but our team knew that an accelerated design-build delivery method was a surefire way to tackle it. After all, why sit comfortably when you can grow through a challenge?

The full range of Impetus’ strength.

Design for the expansion kicked off in the early summer of 2021. With an already fast-approaching deadline, this project harnessed the full range of Impetus’ strengths, including our building, infrastructure, design, fabrication, logistics, shared services teams, and more. The project involved two phases of historic renovation  and one phase of new construction—altogether adding two city blocks to the existing Richard Street campus. Three historic warehouses, originally Mardi Gras float storage, were renovated for millwork space, storage, and additional support space for production crews. A new 30,000 sq. ft. stage was built between the millshop and two warehouses. Over on Constance Street, the Impetus team renovated and repurposed an existing historic building to increase the office and wardrobe space for SLS. New amenities were added, including a kitchenette and the ultimate New Orleans summer utility: air conditioning.

Coordinated dance of speed and efficiency.

Aside from exercising Impetus’ renovation expertise, the project’s crown jewel was the 60,000 sq. ft. new construction of the four-stage studio sitting between the historic properties. Based on cost, timeline, and long-term building life, the precast construction method was the logical choice for SLS—but for Impetus, it demanded a coordinated dance of speed and efficiency. Despite the daunting combination of timeline and supply chain bottlenecks, the Impetus team maneuvered to have prefabrication of the concrete slabs performed in neighboring Mississippi, and custom steel trusses created two states over in Alabama. The building was erected in ten weeks, with 130 concrete panels hoisted into place, each standing 56 ft. tall and weighing 80,000 lbs, along with ten 160 ft custom-made steel trusses, lifted by a large crane maneuvered in through a temporary road. Four elephant doors and two acoustical-rated accordion partitions were installed. The Impetus team also designed and built a stormwater retention system that included 12,700 cubic feet of retainage.

For a long while, film and TV production crews would be forced to retrofit their needs to any available space, sending production field teams scouring across southern Louisiana. With its tripled footprint and production capacity, SLS can now provide production companies with a fully rated option—keeping crews in New Orleans and boosting the city’s economy. In delivering on deadline, the Impetus team worked in tandem to develop the design, manage coordination, and execute both historic renovation and construction. Open communication with trade partners while managing a breadth of owner considerations was key to a cool performance under pressure. Ultimately, the successful expansion of Second Line Stages is one of this company’s proudest achievements. Because chaos is a given in any project. At Impetus, we happen to manage it uncommonly well.